Another Friday, another free story. This week's addition is called Chasing Demons. It is an urban fantasy about a young woman named Agnes Panetti who has made it her personal mission to hunt down the things that go bump in the night...in other words, she hunts monsters. I hope you enjoy this initial installment. 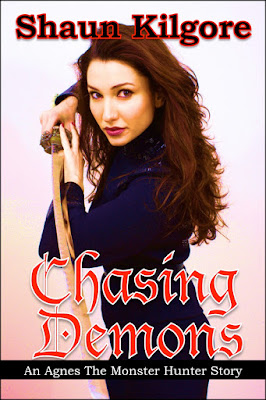 Chasing Demons
By Shaun Kilgore
Copyright © 2012 Shaun Kilgore
Published by Founders House Publishing, LLC
All rights reserved.
The steady thump was familiar and comfortable. The young woman pummeled the training bag with every ounce of her strength, every shred of her focus. First gloves then feet lashed out at the bag, pushing about with steady, staccato motions. Her dark, curly locks were drenched with sweat. Dressed in baggy shorts and a spandex bra, Agnes Panetti had been working out for over an hour. She moved from one part of the gym to the other, relishing the chance to work out her aggression in the solitude of the empty space, using the equipment or just hitting the mats. No one bothered if she came there after hours. Louis didn't mind her borrowing the key. The owner of Durrant's Gym always maintained an open-door policy with little Aggie Panetti.
That last point, usually spoken in jest by old Lou always seemed to get under her skin. She was only five-three. It shouldn't matter that much. She packed a powerful punch and it wouldn't be wise to test her too far. Agnes could be deadly; she knew it too. Still she worked to become better by training in all manner of martial arts and other hand-to-hand combat. She had a good reason after all.
Agnes Panetti hunted monsters.
*   *   *
At nine o'clock, Agnes finished and hit the gym's showers. Most of the lights were turned out, and she knew her way around the darkened old building. Once she'd stripped off the sweat-soaked clothes, Agnes lingered beneath the hot spray, letting the heat of the water soak into her overworked muscles, across the arms, down the back, along her supple thighs. She was still taut and it took some time to loosen her muscles entirely. Agnes tried to keep her mind empty, not focusing on anything for a time. It was difficult. She knew that it would be time to go on the hunt.
The denizens of the city's back streets included not only the normal host of homeless dregs, but also an odd assortment of myths proven true—vampires, werewolves, and other creatures of the night. Agnes had met all kinds since she started patrolling the streets. Since her father had been taken by one of them. The shower was not hot enough to melt away the cold edge of bitterness. Her rage was icy and reeked of death. Her vengeance could wait on the movements of glaciers. She would find the one responsible and destroy those who got in her way. Helping the citizens of Brandenburg was only a side effect of her quest. She had time and meant to use it wisely.
Freshly showered up, Agnes dressed in spandex pants, boots, spandex top and leather jacket. Tucked inside the jacket's worn sleeves was a set of long, slender knives. Agnes had added thin holsters for the daggers so they could remain hidden until she needed them. She added other knives too, which she tucked into her boots. Around her wait, Agnes wore a thick belt, with pouches filled with other necessities of monster hunting: garlic cloves, holy water, wooden stakes (some silver-tipped, some not), and the like.
Opening the door to her locker, Agnes removed the small caliber pistol and made sure the magazine was full. Behind her street clothes inside the locker, small backpack waited as well. It was filled with extra magazine clips, more stakes, and a sheathed machete.
Agnes secured everything and then started to leave the locker room. She paused at one of the mirrors to look at herself. A grim, but determined woman stared back at her. She knew she was attractive and some of the guys that frequented Durrant's Gym hit on her or at least tried to flirt. Agnes didn't feel comfortable with the attention. She hadn't seriously considered men and relationships since her dad was killed. There just wasn't enough time. The thought firmed Agnes's resolve. She took a thin rubber hair band and put her black frizzy hair back in a ponytail. It was time to go.
*   *   *
Agnes walked the dark streets with a practiced eye that scoured the darkness in search of the malignant beings that made the night their home. In the three years she had been a hunter, the population of the city's ghouls had increased exponentially. It was as though they were drawn here by something. Agnes wanted to know. She wanted to find the source and stomp it out.
A bulging yellow moon sat low among the stars on the cloudless night. Agnes wandered the streets on a pre-planned patrol grid. It had made lot of sense early on so she had become a meticulous planner, changing up the grid every night, only allowing herself one night to rest and bind the wounds and tend the bruises and abrasions that evidenced her deadly serious work.
She had been lucky the last couple of night. Few walked away from a house of vampires and lived to tell the tale. The beasts had seemed so surprised that someone her size, so seemingly defenseless—and a woman too—could mete out such violence.
Agnes grinned at the thought and recalled the looks of surprise on their faces as the stakes sunk deep into their cold chests. She savored the spastic jerks and the dull thud as they burst and the dust covered everything.
A sound brought her up short, just a few steps from the intersection and Wayne and Gilbert. Agnes had knives gripped in her hands and she scanned the immediate area.

"I know you're out there," she shouted. "You might as well come out and face me. I'll make it quick."
There was no response, no further sound to disturb the relative quiet of the street.
For several minutes Agnes waited. And listened. She kept her breathing slow and measured. Her reflects were trained well and she remained relaxed, but ready to move.
A flash of movement almost a block ahead caught her attention. A shape resolved out the murk and as it crossed the orange glare of a streetlight she saw what appeared to be a man running. Without hesitation, Agnes took off in pursuit. She rushed along the street, the hammering of her boots echoed dimly on the paved street. She passed night-darkened houses. Most inside slept; unaware of what was transpiring in the darkness.
The figure continue moving out in the open, running straight down the middle of the street. It kept up the distance between them and soon Agnes' began to flag from the effort. She pushed herself until her lungs burned...then pushed more. A few yards ahead, the man stopped dead in the street. Agnes skidded to a halt; her knives were poised and ready. She was about twenty feet away. The man, or whatever it was, remained motionless. It wasn't winded at all. Agnes frowned. It didn't seem to be breathing at all.
If you liked this story, you can buy "Chasing Demons" at the following places:
KINDLE - NOOK - SMASHWORDS
at February 24, 2012