Challenge Story #8: The Oracle Of Sadeer

It's friday again, Free Fiction Friday, where I upload a new short story for you, the readers, each week. As the name implies you can read the story absolutely free until next Friday where it will be replaced by another story. I hope you enjoy The Oracle Of Sadeer. It's a fantasy tale. 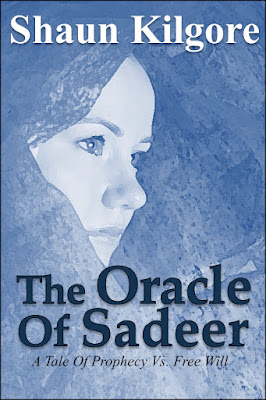 The Oracle Of Sadeer

Nabbeth squeezed through a gap in the crumbling walls to enter the weathered ruins that perched atop the hill overlooking her village. There was something exciting about the notion she was breaking Bellar's edict. The old wizard had forbidden any of the people to venture up into the ruins and none had dared to cross him. Nabbeth was an exception. She just couldn't pass up the chance to visit the remains of the ancient castle that jutted up like a jagged tooth to blot out the skies each midafternoon. Bellar fussed and fumed about the most harmless things; his mind wandered often and he spoke of the times before Nabbeth's people had ventured down out of the mountains.

Coming out into the open court, Nabbeth looked up at the crumbling and vine-choked walls, the shapes of balustrades and the battlements where long-dead warriors fought to defend the fortress from equally nameless invaders. The details were long lost and even Bellar had no idea who had built the castle. The only facts that the wizard liked to mutter were the kinds that were told to make children behave. Ghost stories and nothing more. Standing there, Nabbeth snickered. There was no one there but her.


The floor of the court was a mix of bare earth, tall grass, and stones that jutted up at sharp angles. In the corners were piles of bricks and stones that had been stacked up. She had heard the stories about people looting the stones from the long abandoned castle to build homes or fencerows. The stories also talked about how the stones were brought back by fearful villagers and farmers from all around the valley; the stones were cursed or so they said.

Nabbeth looked around the piles and leaned over to pick through the stones. Here and there she saw the faded colors of what were probably decorative paintings. She wondered what they would have looked like intact. Nabbeth explored the ruins with relish, keeping to the court at first before she entered the first door. Inside, the midmorning light came through the cracks in the seams and from broken windows so Nabbeth had no trouble walking the passage. She would only venture as far the light went. Even she was not foolish enough to enter the darker parts of the castle without a lamp or torch.

Shadows played across the corridor and Nabbeth squinted at times so she could be sure not to trip over the rubble. She glanced down at her dark boots. They were covered in a fine layer of dust and dirt. Looking back, Nabbeth realized her footsteps were probably the first ones to disturb the lonely place. There was a damp chill to the air that wormed its way through even her sturdy, woolen gown.

"I wish I had brought my cloak along," she said. The sound her voice produced a deep echo that reverberated back to her from the high ceilings.

If you want to read the rest, the whole story is available for sale on the Kindle, the Nook, and for other e-readers via Smashwords.com