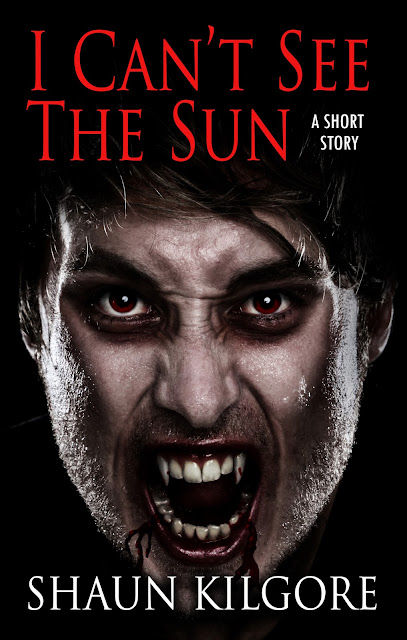 The end must come. He knows this better than any living creature. He has lived many lifetimes, sustained by the lives of others. His blood lust has compelled him to do so many unspeakable things over the centuries. But, yes, it must finally come to an end. He must pay for his crimes, but maybe find some peace in embracing oblivion.

I Can't See The Sun by author Shaun Kilgore is free on this website for one week only. The story is also available in Kilgore's Five Stories #14 which is sold through various online retailers.

I Can’t See The Sun
By Shaun Kilgore

The moon rules the night sky, bright and full. Its cold, bluish light illuminates the night-shrouded lands below, reflecting off the pale surface of the freshly-fallen snow. I stare up at that pregnant orb, wistful and longing for another time—no, another age. The moon’s light shining down upon the winter world is a but a faint reflection of the sun. That molten sphere which touches the surface of the earth with its golden glow, its radiant warmth. But it is a warmth I shall never feel again. Such is my lot, my fate, and my curse. I am but a shadow and a creature of the midnight hours. Hidden and unseen, I stalk this darkened plane, hunting and preying on those whom my life depends.

Now, what warmth I might feel is not my own. It belongs to another and the presence of it in this husk I call my body is fleeting. I am sated for now. What I took was from the unwilling, the helpless, the enfeebled. Their fear left me unmoved even as I snatched the light of their lives from them, as I had from countless other before them. I feel no pity and no remorse. Those emotions were stolen from me when I became what I am, what I have been for so many long years.

I had come upon them a scant few hours earlier. They were band of Romany peddlers, outcasts of a sort even from their fellow men, their covered wagons arranged around in a crude circle beneath jagged oaks and maples with branches that seemed to be clawing at the heavens. I skulked in the darkness just beyond the fitful flicker of the campfires that burned to ward off the chill watching them move about, talking, singing, dancing, doing anything in a effort to keep warm on a cold winter’s night. I waited until their mirth waned and weariness pulled on their eyelids and the pour creatures retreated to their blankets and to slumber. When all had grown quiet and the sounds of their beating hearts were like the pounding of drums in my head, I crept in among them. The horses whickered nervously but my touch soothed them as were the hounds that were suppose to be their guardians. A gift that used to calm both man and beast.

The hunger was fully upon me at this point and I was ravenous. As I reached the nearest wagon, I could sense the warmth of the blood flowing in the veins of those that slept within. The rush of it filled my ears. I would not be denied. The next moments happened quickly. My blood lust had taken over completely. What followed were their were muffled cries of surprise, struggling attempts to fend against my terrible strength. I tore through their flesh, letting the richness of their blood flood into my mouth.

The experience of ecstasy was more intoxicating than anything I had every experienced as a mortal man. All reason was driven out of my fractured mind. The only thing that existed was the hunger. A man then his withered in my hands as they gasped their last breaths in this world. Their fitful moans were like the crooning of some strange song to me. Finally, I found the small form of the child huddled beneath a patchwork quilt. Her eyes were wide and fearful. I took her into my arms, cradling her close to me. She looked up at me as I seized her tender neck with my mouth, her gaze suddenly calm, accepting of her fate. She looked at me with the eyes older than humanity. Something in me, something deep down, crumbled as her light faded and her body went limp. Her blood burned like a blaze through my darkened veins to my black heart.

Still, I find that I mourn—not for them—but for myself, for what I was once I mourn that other world, that other life, however brief it may have been, wrapped by the shackles of mortality. But such bonds were removed from me and I have roamed ever since. Unsettled and alone so much of time, I lost what humanity I had piece by piece.

Now, what am? Just a sad and lonely ghost.

In the distance, something disturbs the stillness. I know what it is. The hounds are barking and the survivors are shouting, rallying together with sticks and stones, and waving their torches about to dispel the darkness as they hunted the thing that killed their kin. They are coming for me. I don’t run. Why should I? I am weary beyond all measure. I return my gaze to the moon and think of the past once more. I am ready to die. Too long have a lived when I should have ceased to be. I am an abomination before Almighty God, the very spawn of Satan.

They carry crucifixes and wooden stakes, the implements the believe will be effective against one such as I. These are but myths and legends really.  But I don’t really care. I can see the determined expressions on their faces, the anger overwhelming their fear of me, in the light of the flames—yellow-gold like the sun—and I welcome them to try their best to slay me. I have been the servant of death for centuries, I can endure it no more. An agony wars inside with the hunger of the demon that has driven me since I was infected by the one I call my second father, the one that presided over my rebirth into damnation.

The mob of distraught souls closed the distance between us. I waited out in the open beneath the moon, standing in the middle of a perfect patch of powdery snow rather than fleeing into the sky and to safety. The flames of their torches alight upon me. I flinch before that steady blaze. The screams are likes those animals. Blinded by tears and anger, they still see well enough to rain stones upon my flesh. There is no pain but I slump to the ground to let them think as much. I give them no fight. For once, I am the easy prey.

Through squinting eyes, I see one of them approach bearing his torch before him. The rich yellowish glow truly is so much like the sun, the sun I can no longer see with my own eyes. As the flames hungrily lick at my flesh, I pretend that the spreading heat of it is the warm light of the sun on a beautiful spring day. As I am consumed, I remember who I was and what life had meant. My screams are not those of pain but of joy and complete release. Finally, I know that it is over.

If you like my stories, and FREE FICTION FRIDAYS, please consider supporting me. Drop a tip in my virtual tip jar at www.buymeacoffee.com/shaunkilgore or offer ongoing support via my Patreon: www.patreon.com/shaunkilgore.