New Release: A Kingdom Of Shadows 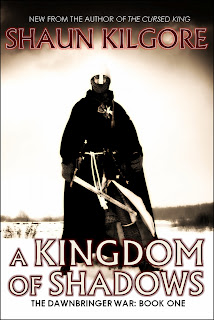 Today is the official release of my second full-length novel, A Kingdom Of Shadows. It is the first book in a series. I hope to begin working on the next installment very soon.

The great contest is days away. Alan Serandos, an ex-soldier with no future prospects and no hope, plans to win. The prize: The hand of Princess Mariel and a place in the royal family.  Meanwhile dark forces have plotted to disrupt the contest and by doing so threaten to topple the kingdom of Calos. An ancient pact will be broken and Mariel will find herself a pawn in a greater game of noble houses and malevolent magic.

A Kingdom Of Shadows will be available in all major ebook formats. I am including the major links as they go live. Smashwords lets you download in various formats including for the iPad.