Well here we are with another Free Fiction Friday, and I have just finished a new story. Check it out. 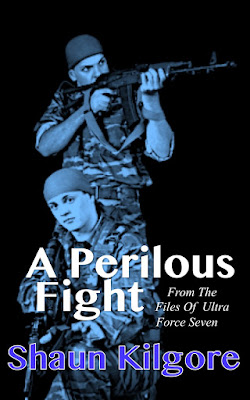 A Perilous Fight
From The Files Of Ultra Force Seven
Shaun Kilgore
Copyright © 2012 by Shaun Kilgore
Published by Founders House Publishing, LLC
All rights reserved.
Even after seven months on the front, the report of gunfire seemed an unnatural intrusion, a painful and wrenching reminder of what had been lost. The damned rule of law and a lot of other important details that had given civilization a fighting chance. The skies were muddied with black plumes, the latest in a series of fires set over the course of the previous week. Looking out of the charred remains of the city, you could be mistaken for believing that Armageddon had finally come.
Nathan James gazed down into the rubble, panning the binoculars slowly from side to side so he wouldn't overlook something. There was desperate thread to the whole business. Nathan knew it was only a matter of time before some nutcase with some bazookas or old AK-47s lifted off the corpses of soldiers came barreling through the baracades, bent on doing as much damage as possible before the snipers took his ass down. Nathan hated the work, but he was only one of many who had been sent out by the command to do some scouting in the ruins of one of the big cities. Waste zones? Waste zones were an understatement. What could possible be work saving or salvaging in that frigging mess?

Nathan stowed his binoculars in the case at his belt and slowly retreated the way he came, careful not to disturb the debris too much on the way down the side of the collapsed building. At the bottom, he found the electricycle right where he left it. A good thing too. It would have been a bitch to try to hoof it back beyond the secondary grids. And Sid would give him a hell of lot of grief too. Nathan would prefer to stay on the good side of Captain Michaelson.
The engine on the electricycle powered up with a steady hum. Nathan glanced at the readouts. Still fully powered. He took off at a ground-eating pace, taking the bike as fast as he dared in the obstacle course of rusted out automobiles and other vehicles clogging the worn streets out of the city.
For twenty minutes he rode until he came to the next crossing. Nathan slowed the bike and sent his authorization code through the coms. He was clear.
The barriers were lifted and Nathan took the bike inside. On the way to headquarters he passed several groups running through drills and generally trying to stay busy in what had become a long pause in the hostilities. The base of operations was an abandoned middle school situated in what were once prosperous suburbs before the oil economy collapsed.
(UPDATE: 3/23/2012)


If you liked this sample of Perilous Fight, you can purchase the full story on the following sites for most e-readers: