Each week I will have free fiction on my website. You will get to read a different story absolutely without charge until the next story comes up. Afterwards, an excerpt will be left on the site. If you want to read the rest of the story you can buy it for Kindle, Nook, and other e-readers. 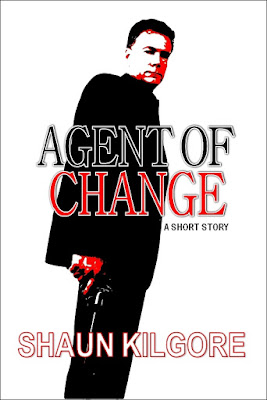 Agent Of Change
Shaun Kilgore
Copyright © 2012 Shaun Kilgore
Published by Founders House Publishing, LLC
All rights reserved.
The crowd was roaring by the time he approached the podium. I was standing back, scanning the corridors, the aisles, and the individual faces of the people lining the path. Members of my team were muttering in my earpiece, checking in, and noting incidentals. We were practiced at our business. Only once in three years did we have an issue - one that was quickly swept under the rug. POTUS never knew a thing.
While President Anderson delivered a keynote speech for the fundraising rally, I watched the corners of the hall. Each of us has designated areas. No one could watch this many people on by themselves. It was always a team effort. When the chief executive's life was on the line, you took every precaution.
POTUS was good at his job too. He had the crowd eating out of his hand. These people were his base, but still his pumped them up like they were new to the political scene. I had watched this man uplift people time and again. The wonderful true of it was that he meant every word. I had been following David Anderson for three years now. Standing vigil over him day and night, I had the deepest access into his daily life and what he said behind closed doors in the Oval office. I was the team leader for his security detail. POTUS had given me more than enough reasons to be loyal to him. I would follow that man wherever he led.
As the speech was nearing a crescendo, I whispered into my wrist mike.
"Gregory, Tolbert, POTUS is wrapping up his remarks. Is everything clear along the exit path?"
Neither responded.
"I repeat, Gregory, Tolbert, do you hear me?"
Still nothing.
Across the auditorium, I motioned to Peterson. Suddenly, his voice filled my earpiece. "What is it?"
"I'm not getting Gregory or Tolbert? Can you get them?"
A moment passed.
"No, “said Peterson. "I got some static on their channels, but that's it. At the far end I could see Agent Michaels. Then a blurry shadow passed nearby. The crowd was still cheering, but the sound is suddenly much louder. As they swayed back and forth, some dancing, and shouting affirmations to POTUS.
Then I realized Michaels was one. My stomach clenched.
Jerking my eyes back to Peterson, he too is gone.
At that moment, POTUS finished speaking.
At that moment a roaring sound blasted through the auditorium. The concussive force threw the crowd all over the place. The people, most of who had been cheering, were now scrambling for their lives. Jumping to my feet, I bolted to the podium. POTUS was just standing up. I had my gun already drawn.
Grabbing his arm, I spoke fervently. "Mr. President, we've got to get you out of here."
Though disoriented, and bleeding from a gash on his forehead, POTUS nodded.
We moved quickly, getting to the door quickly. My heart was beating me up but I couldn't think about my soaring pulse rate. My only thought was getting POTUS out of the room and hopefully out to safety.
As we reach to door, another concussive wave reverberated through the room. This time the blast shakes the building itself. Chunks of plaster and light fixtures fall. The people milling about between overturned chairs started moving frantically, struggling to reach the exits themselves before the whole auditorium came down. The lights go out just as the door slammed shut behind us.
In the hall, POTUS and I moved down east towards the closest exist. There were more people streaming down the corridor. Most shied away when they noticed the gun in my hand.
The sounds of our labored breathing were unnaturally loud once we get beyond the others. Every second I scanned forward and backwards. Then another explosive sound rocked the building. This time it was much stronger. I heard a humming sound then the sound of metal and being rent apart.
"Damn! Come we've got to get out of here. The whole place is going to fall."
"What the hell is going on Ramsey?" asked POTUS.
"Sir, I have no idea. All I know is that we've got to go!"
Second passed and we burst through double doors and were out in the open. The sight made us skid to a halt. The surrounding buildings were burning some had collapsed. The whole presidential escort had been destroyed. Two agents were down, while several were missing like the others. There were other injured people all around us, some covered by rubble, others the victims of collisions.
"Jack, good God, do you see that?"
Tearing my eyes from the carnage, I followed POTUS's hand pointing to the sky. There hovering just above the tallest building was a massive metallic sphere. It was shimmering with a bluish light.
A terrific crash shook the ground. We turned back to see the auditorium come crashing down.
The trance broken, I grab POTUS. "Let's move, sir."
"What about the others? Wait, I have to get a hold of the military. We have to scramble fighters, call NORAD. Damn it, Ramsey. I'm the President of the United States. I need to do something."
I had trouble saying anything. My eyes were being drawn back to that brilliant sphere. It was mesmerizing. Shaking my head, I gritted my teeth.
"Sir, it isn't safe here. We need to go."
"Do you have your phone?"
"Sir?"
"Your phone Ramsey! Let me see it?"
"No sir, we have to leave now! At least take cover."
READ THE REST ON YOUR PREFERRED E-BOOK READER. THIS STORY IS AVAILABLE ON MOST FORMATS INCLUDING KINDLE, NOOK, KOBO, AND IPAD.
at January 14, 2012