It's In Print: Autumn Sky 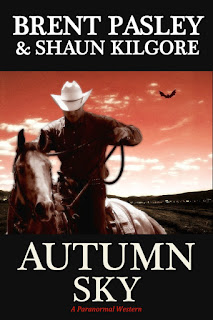 You can now pick up a copy of my latest book, Autumn Sky in paperback. It is a paranormal western I wrote with fellow writer Brent Pasley. Books can be purchased on Amazon.com. The book is also available in most electronic formats including Kindle, Nook, and through Smashwords, which covers iBooks, Diesel, Kobo, and other e-readers or platforms.

Set in the late 1840s, it follows the trek of a party of settlers traveling through the Kansas Territory. Their leader, a veteran cavalryman and trail guide named Abel Carter. As they head for Fort Leavenworth, the wagon train is beset by a band of Cherokee who wield supernatural powers. In a moment, a young woman is taken and Carter sets out to recover her. He encounters deeper more sinister forces, spirits and creatures of the night which have plans for the weathered soldier. Will Carter survive? Or will he be consumed by darkness?
Back cover summary:
There are many dangers on a wagon train headed towards the goldfields of California. Veteran cavalryman and guide Abel Carter leads another group west through the Kansas Territory when strange and terrible things start happening. Ghostly natives haunt the prairie, shadowing the wagon training as it makes its way to Fort Leavenworth to winter.
Behind the Cherokee warriors, a more menacing, supernatural presence has awful designs for Carter. Will he survive? Will anyone?
at November 14, 2011