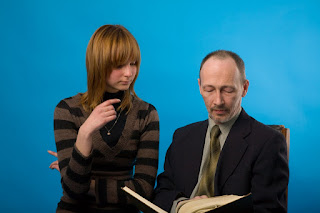 Hello. It's be a little while since I wrote something besides an update. I just wanted to share my first impressions of a small author signing/event that I was able to attend yesterday. I suppose I had a few good reasons to be there - two of which relate to publishing. The other was purely based on my interest as a writer hoping to meet fellow writers. I had some expectations that proved accurate and others that were not presented in that setting. I hope to add more events to my belt in the near future.

This event was a pretty good one for my father. This made the second such event we've had for his book Echoes From The Past. I'm all about promoting this book locally, via this current series of events, but also through the television and newspaper coverage. I've made some headway in online areas, but I hope I can do more. (This is as much of a learning experience for me as it was for my dad.)

What's great about the event was that it was an opportunity not only to get our book some exposure, but it also offered me a chance to interact with other authors. The event, called "Meet The Authors," was hosted by the Clinton Public Library in Clinton, Indiana. It's about a forty-five minute drive from where I live. So, with kids in tow, I drove over there and made it to the library about an hour into the event. (It lasted from 4 to 7pm.)

It took place on the second floor of the building, in what I took for a meeting/multi-purpose room. There were eight tables lined against the wall around the perimeter of the room. Each author had a place to display books and other information as well as sign books that visitors purchased directly from them. My dad was positioned right inside the door.

After I was settled in I started wandering around the room. The first author I talked to was Phil Dunlap, a western writer. Not only did this guy know the old west down to accurate guns and anecdotes about figures like Wild Bill Hickok, but he also some valuable insights about publishing and design. I spent a lot of time talking to Dunlap about business and he gave me some great tips about what to use to make the most of my own book designing efforts.

The only unfortunate thing was that I didn't get more time to talk with Dunlap and the other authors. I barely scratched the surface as far as potential knowledge and insights into this new realm of publishing I've entered. While I bravely held on until near the end, the allergy season took its toll on my health. I was feeling pretty sick and had to leave. I hope next time I get the chance to get through it all and find out more. I appreciate the opportunity that such events holds out for both aspiring writers and publishers too. I recommend them for any one who's  ready to take the plunge.
at April 13, 2010